The following information is taken from the 2021 Micon PEA Technical Report. A Feasibility-level report is expected to be released late in 2022 which will update designs and cost estimates shown here.

The oxide resources that are the subject of the 2021 PEA are located close to the surface and would be mined by open pit methods.

The production requirement for Candelones was to establish a mining rate that would achieve an optimal balance between capital cost minimization and operating cost minimization. This was achieved through the adoption of a three-year mine life with all mineralized rock above the cut-off grade going directly to the primary crusher and then onto the leach pad.

The mine will operate 360 days per year, with five days scheduled for non-operation. Mining will be carried out on two eight-hour shifts per day.

Additional mine operations time scheduled for loss will occur overnight as the mine will operate on two eight hour shifts to follow ILO guidelines.

The mining of the Candelones Starter Pit will generally be executed in 4 m benches, using 2 m flitches where preferred. Whereas the block model has dimensions of 6 m x 6 m x 2 m (height), the mine planning has the ability to evaluate strategic selectivity using of 2 m flitches as needed. In general, however, for improved productivity, 4 m benches will be preferred. Where blasting is required in the transition material, 4 m will be drilled with 0.75 m subgrade.

The overall pit slope angles are all less than the 40-degree maximum of the inter-ramp angle defined by the face angle and the berm widths. The mining of the pit will be divided in to four pushbacks during the 3 years of operation.

The mining rate follows the 5,000 t/d throughput capacity of the crushing circuit by which the leach feed is reduced in size prior to being loaded onto the leach pad. This amounts to 1.8 Mt of leach feed planned to be mined, crushed and leached per year.

There are generally several active faces being mined at any time, thus minimizing the impact of congestion of equipment in the pit and on haul roads, and also increasing the flexibility of the mine plan during rainy seasons.

A total of 5,000 t/d of mineralization from the Candelones open pit will be mined and hauled approximately 3 km onto a "run-of-mine" heap leach pad. The feed to the leaching process will be crushed using a mineral sizer, in order to break-up agglomerates and oversized material. The leach feed will be mixed with hydrated lime prior to being delivered to the heap leach pad. The pad will be irrigated with a leach solution obtaining a LOM average 75% leach gold recovery following a 10-week leach cycle.

Gold and silver will be recovered from the pregnant leach solution ("PLS") by contacting the solution with granular activated carbon-in-columns ("CIC"), followed by a Zadra adsorption, desorption and regeneration ("ADR") plant, comprising acid wash, elution, carbon handling, carbon regeneration, electrowinning cells and refinery to produce doré. No tailings facility will be required.

The infrastructure included in the PEA includes the following:

Micon's QPs estimates of the capital and operating costs are expressed in first quarter 2021 United States dollars, without provision for escalation. Where appropriate, an exchange rate of DOP 58/US$ has been applied. The expected accuracy of the estimates is ±30%.

Total capital costs for the base case are forecast as shown in Table 1.4.

The operating costs have been estimated from first principles. A summary of these estimates is presented in Table 1.5.

Micon's QP has prepared the assessment of the Project on the basis of a discounted cash flow model, from which Net Present Value ("NPV") can be determined. Assessments of NPV are generally accepted within the mining industry as representing the economic value of a project after allowing for the cost of capital invested.

The objective of the study was to determine the potential viability of an open pit mine, heap-leach pad and gold recovery plant on site. In order to do this, the cash flow arising from the base case has been forecast, enabling a computation of NPV to be made. The sensitivity of the NPV to changes in base case assumptions is then examined.

All results are expressed in United States dollars except where otherwise stated. Cost estimates and other inputs to the cash flow model for the Project have been prepared using constant, first quarter 2021 money terms, without provision for escalation or inflation.

Project revenues will be generated from the sale of gold doré bars. The Project has been evaluated using constant metal prices of US$1,650/oz Au. While below current market levels, the forecast gold price approximates the average achieved over the 24 months ending 23 April, 2021.

Figure 1.1 presents monthly average prices for gold over the past ten years, along with the 24-month trailing average price over that period.

Dominican Republic provincial income and mining taxes have been provided for in the economic evaluation, comprising a 5% royalty on gold sales, which is credited in full against income taxes levied at the rate of 27%. Depreciation of capital costs is allowed on a modified declining balance basis.

The technical parameters, production forecasts and estimates described within the body of the report are reflected in the base case cash flow model. These inputs to the model are summarized below.

Figure 1.2 shows the annual tonnages of waste rock, and the material heaped on the leach pad, the average ore grade, stripping ratio and the gold content of the material to be leached. Heap leach extraction of gold has been modelled assuming 80% recovery from oxide material and 50% from the transition zone. Notwithstanding column testwork showing more rapid leaching, the cash flow model assumes that full recovery of the leachable gold will require 3 months from placement of material on the heap.

A further 7 days of sales is provided in working capital for accounts receivable. Stores and accounts payable are provided for with 45 and 30 days, respectively. 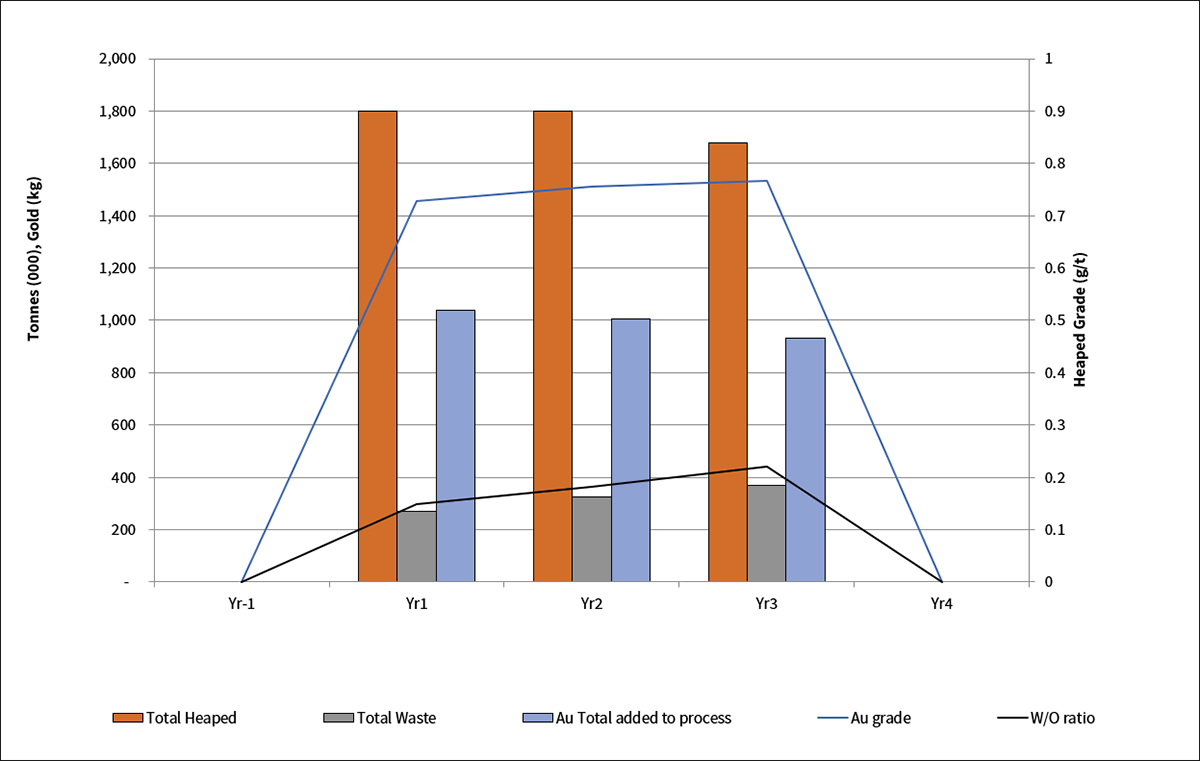 Figure 1.3 shows the annual sales revenues compared to cash operating costs and capital expenditures. The chart demonstrates that the Project maintains a significant operating margin in each period over the life-of-mine, with the operating margin forecast to average 57%. 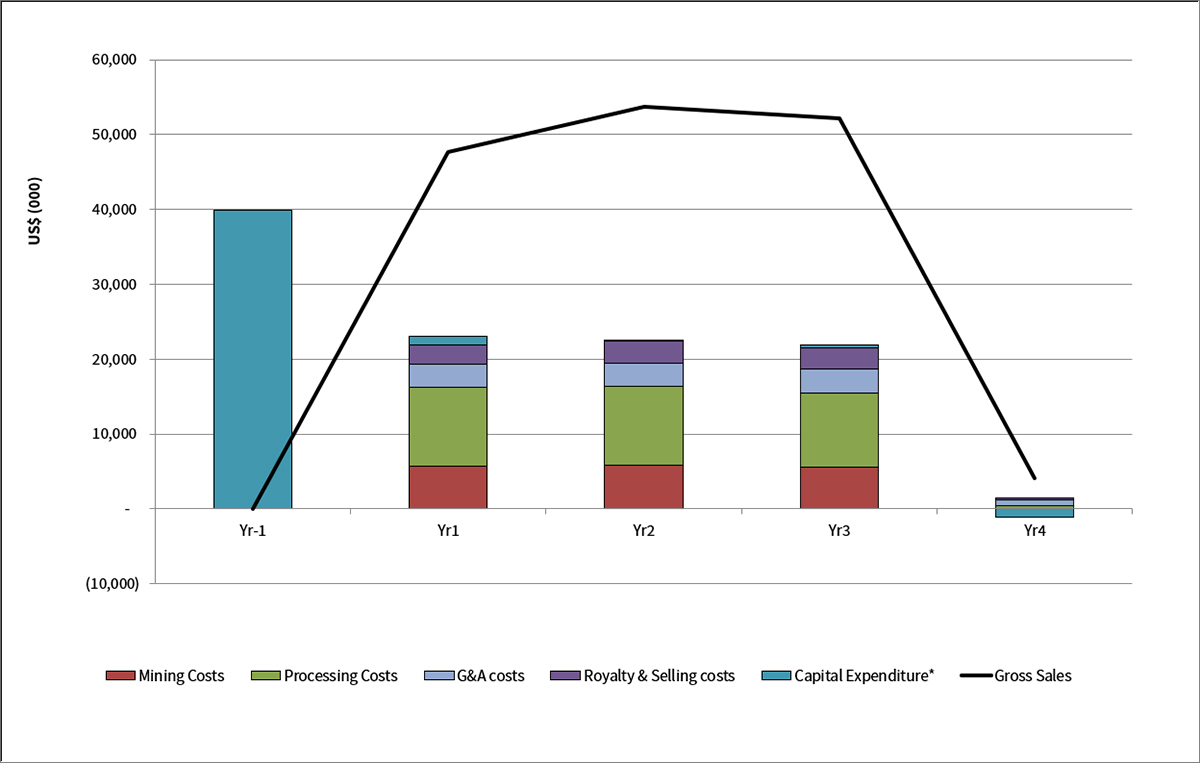 This Preliminary Economic Assessment is preliminary in nature; it includes inferred mineral resources that are considered too speculative geologically to have economic considerations applied to them that would enable them to be categorized as mineral reserves, and there is no certainty that the preliminary economic assessment will be realized.

The estimated life-of-mine base case Project cash flow is presented in Table 1.6 and summarized in Figure 1.4. Annual cash flows are set out in Table 1.7. 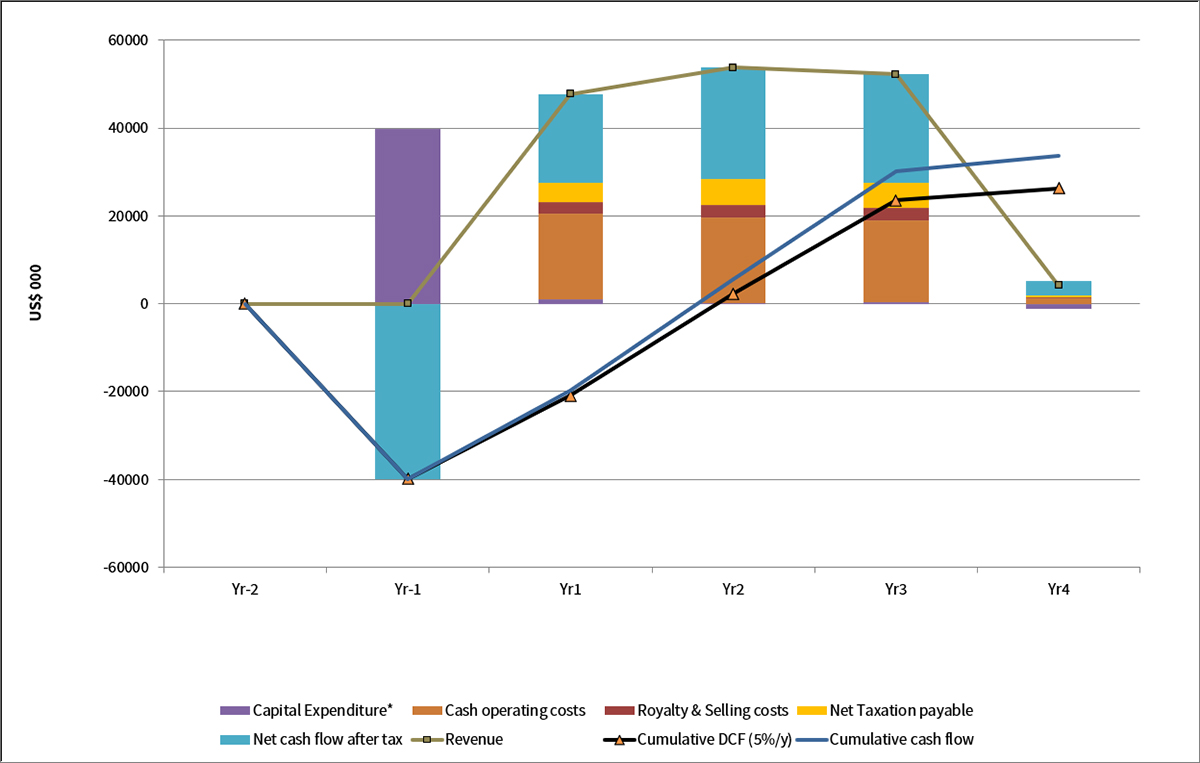 Micon's QP tested the sensitivity of the base case after-tax NPV5 to changes in metal price, operating costs and capital investment for a range of 25% above and below base case values. The impact on NPV5 to changes in other revenue drivers such as gold grade of material treated and the percentage recovery of gold from processing is equivalent to gold price changes of the same magnitude, so these factors can be considered as equivalent to the price sensitivity.

Figure 1.5 shows the results of changes in each factor separately. The chart demonstrates that the Project remains viable across the range of sensitivity tested, with a negative NPV5 recorded only with a 25% reduction in gold price to $1,238/oz. The Project is less sensitive to both operating and capital costs, with an increase of 25% reducing NPV5 to $16.6 million and $17.1 million, respectively.

Figure 1.5
Sensitivity of Base Case to Capital, Operating Costs and Gold Price 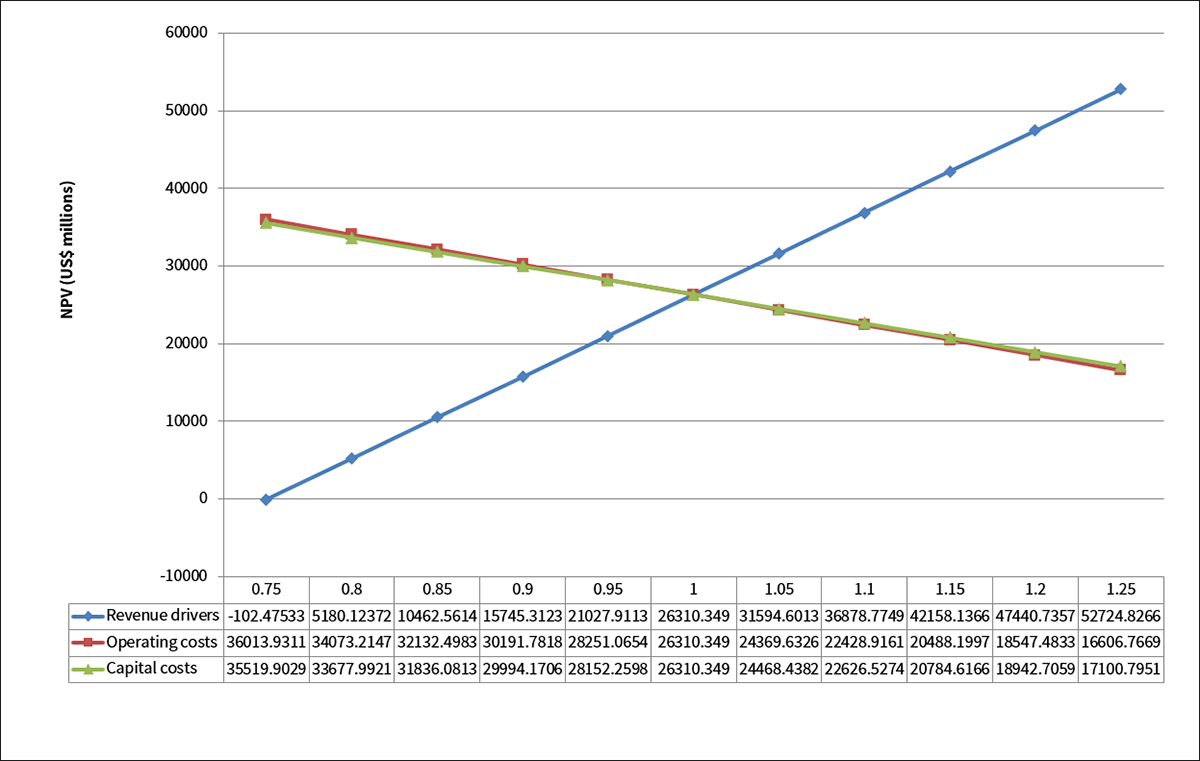 Separately, Micon's QP also tested the sensitivity of the Project NPV5 for specific gold prices above and below the base case price of $1,650/oz. Table 1.8 shows the results of this exercise, which demonstrates that each $100/oz change in the gold price results in a change of around $6.4 million in NPV5.

Table 1.8
Base Case: Sensitivity of NPV5 and IRR to Gold Price